I am very excited to be researching about Paraiba Tourmaline, but to be honest, much more about having this amazing stone in my stock for sale! First time I ever saw a Paraiba Tourmaline was in Barcelona – believe or not – with a Turkish gemstones dealer. In this time I didn’t have a clue about how much I would love and appreciate the gem. Maybe you are going to be like me in the end of this article… Paraiba Tourmalines are among the rarest, the most sought-after and most expensive gemstones in the world What makes the Paraiba Tourmaline so popular?

The Paraiba Tourmaline unique glow and spirited colour - This precious stone has a glow that can only be described as “neon” and “electric.” The gemstone world was captivated from the very beginning by the beauty and spirited colours of the Paraiba tourmalines. In no time they achieved great popularity, and today they are among the most sought-after and most expensive gemstones in the world.

The gold content  - A study by the German Foundation for Gemstone Research indicates that Paraiba Tourmalines have a gold content that is much higher in proportion than that of the earth’s surface.

The recently discovery - Paraiba Tourmalines were not discovered until very recently. The gems were first identified in the late 1980s by a prospector named Heitor Dimas Barbosa, at the Mina da Bathalha, in the state of Paraíba, Brazil. The Batalha’s mine is not operating any more.

The hand mining of Paraiba Tourmalines - In Brazil, the Paraiba tourmaline mines are hand excavated. Apart from that, Paraiba tourmalines in the rough can only be found in small veins that are as thin as pencils. Mining Paraiba stones is difficult; they are mined mostly by hand with manual tools like wedges and sledge hammers.

This is all very exciting, isn’t it? 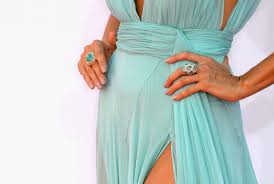 Take a look at these astonishing jewellery Heidi Klum was wearing in the Emmy Awards 2012.

Here is what the article said about Heidi: “As for the jewelry she had a good selection of gemstones including black opal along with vivid natural pink diamond. But the real highlight of her jewellery ensemble was the Paraiba drop earrings. It is important to take note that The Paraiba tourmaline is among the rarest and most valuable gemstones in the world due to several combined reasons. This due to a few reasons like this type of tourmaline was found in two places on earth, which have been mined out. So these mines produce very small yields making the mining processes were costly. Besides this she wore two rose-gold, diamond and Paraiba rings.”

Ps. The design is  Lorraine Schwartz